Almost every business that makes a product also makes waste. This is why the majority of us are having to pause and take a closer look at the impact our operations have on the environment and consider the big question “What financially viable options are available?” It’s also no secret refineries in particular have a big challenge ahead in this arena. Huge production volumes naturally mean huge volumes of (potential) waste and byproducts … unless you can regenerate the material and give it a second life. Believe it or not, that’s the power of the circular economy, and it’s happening in refining and other industries right now.

Of course, sulfuric acid is not exclusively used in refineries. It’s also used in making batteries, steel, fertilizer, glue, dyes, paper, pharmaceuticals, explosives … the list goes on! This makes it an ideal candidate for regeneration as it has an impact that reaches many industries. For refining in particular, the volumes needed are significant. Between 2.5 million tons and 5 million tons of spent sulfuric acid is currently reclaimed from petroleum refining and chemical processes annually. Expanding and optimizing these recycling processes holds significant potential for positive environmental change.

Once sulfuric acid is processed in the refining process, it becomes spent acid, which is less concentrated due to picking up impurities like organics, water and metal, that make it unusable. The regeneration process starts by thermally cracking the spent acid in a furnace to separate the different compounds. The spent acid is heated to between 1,000 and 1,200 degrees Celsius, breaking it down into sulfur dioxide gas (SO2) and steam while the dissolved organics act as a fuel. The sulfuric acid (H2SO4) can also be used as a fuel in the furnace, and the sulfur molecule can be converted to SO2. 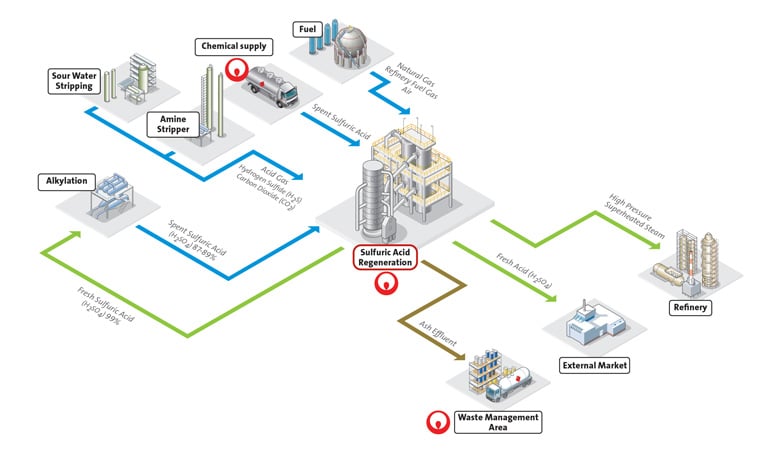 The gas and steam mixture is then cleaned to remove any residual organic or metal impurities, dried, and converted into sulfur trioxide (SO3). The SO3 is then absorbed into sulfuric acid and combined with water to produce a high quality sulfuric acid that, depending on the application, is formulated in concentrations ranging from 93% to 99.2%. This acid can then be reused as a catalyst for alkylate production.

In some countries, spent sulfuric acid is disposed of as waste, and sulfur gas is emitted and lost. In the US, both are put to further productive use. In doing so, refineries are lessening their dependence on purchasing new sulfuric acid and gaining more value from a resource they already have.

How does sulfuric acid fit into the circular economy?

In the U.S. alone, over 35 million tons of sulfuric acid are produced every year. That’s roughly two and a half times more than the amount produced of the second most common chemical, propylene. Looking at materials that are used in large volumes is critical to fast, meaningful change for our planet.

Circular economy efforts aim to reduce waste as much as possible by creating more closed loop systems. Significant ecological transformation comes down to individual companies taking action to increase their sustainability, ensure their long-term profitability, and create partnerships that lessen their dependence on new, virgin resources.

One area that has pioneered industrial progress in circular economy solutions for decades is sulfuric acid regeneration (SAR).

The case for a sulfur circular economy

Creating a closed loop system for sulfur production and disposal is a critical piece of the circular economy as a whole because it is one of the most commonly used commodities in the world. For the refining business in particular, the task requires developing a source of concentrated sulfuric acid while reducing sulfur emissions and avoiding the final disposal of spent acid.

The solution to this need is sulfuric acid regeneration — taking the used acid and regenerating it to return it to a purer form to be used in the refining process once again. Onsite regeneration provides refineries with a source of high quality sulfuric acid and makes them less dependent on outside resources. Plus, by capturing and converting spent acid into viable sulfuric acid, petroleum producers can reduce harmful emissions while providing themselves another source of a required feedstock.

The details: sulfuric acid and sulfur gas in the petroleum industry

The sulfur molecule affects many refining processes, primarily: sulfuric acid as a catalyst in the alkylation process, sulfur compounds in petroleum feedstocks, and sulfur gases as an emission.

So why doesn’t every refinery regenerate their sulfuric acid?

Although regeneration seems like an obvious and smart business choice for petroleum refineries, it’s not always the easiest process to implement. Shipping sulfur byproducts to third-party sites can be costly and produce transportation emissions, but having a regeneration facility onsite can be difficult to maintain and manage for refinery staff.

There are third-party experts that help refineries with both onsite and offsite solutions. The most efficient solution is to partner to build and operate a sulfuric acid regeneration plant onsite, eliminating transportation costs. This method creates a tight loop between both operations, with the refinery sending spent acid and sulfur gas to the regeneration plant, and the plant sending back acid and steam for refining. 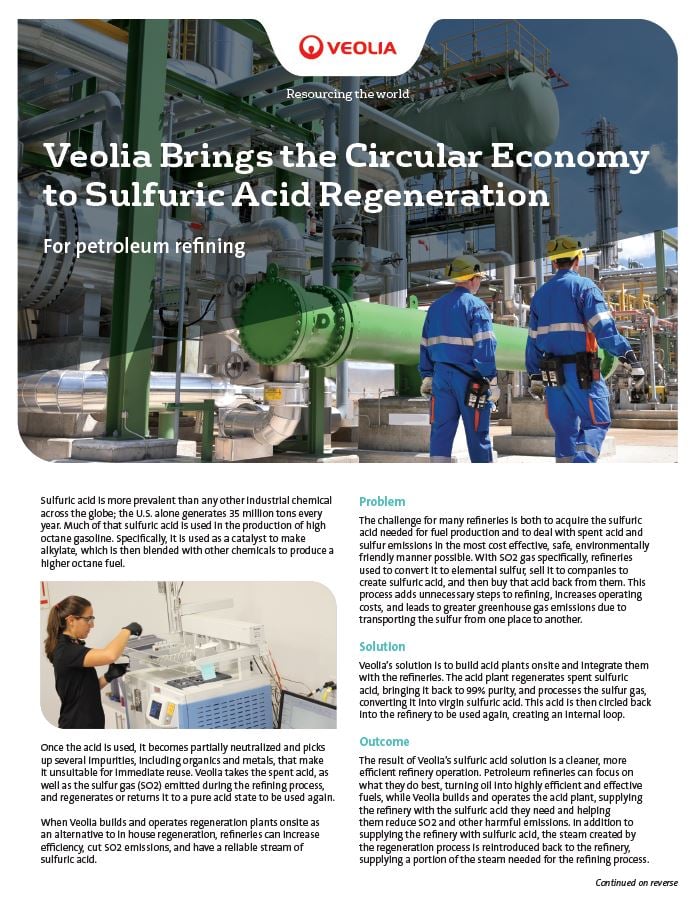