How Do Renewable Fuels Fit Into the Energy Transition?

We’re in the midst of a massive transition to cleaner, renewable energy sources. And we’re not just talking about solar and wind power. For the bulk of American industry and infrastructure, the shift towards clean energy means adopting renewable diesel and biodiesel fuels, too.

In the new energy mix, it's critical to take a careful look at the overall impact of new processes that are meant to do good. In reality, they’re new and will bring along their own challenges

Is there enough feedstock? Is production sustainable? If they still burn, how are renewable fuels better for the environment? This blog explores how the top producers are navigating the rapidly changing landscape and what they will need to prioritize to ensure renewable fuel production ultimately has a positive net impact.

Who’s leading the pack for renewable fuels in the energy transition?

The transformation is already well underway. The top producers of renewable fuels will have significant influence on the pace and the net environmental impact of introducing renewable fuels. Not every producer has the same priorities or incentives so it's important to examine who has a seat at the table and why it makes sense to transition to cleaner energy. As producers implement new renewable fuel production facilities, it's critical that they do so without losing sight of the net impact of their operations.

What are renewable fuels?

The advantage of renewable diesel over biodiesel is that the former can fuel engines with 100% concentrations, while biodiesel fuels are typically 20% bio and 80% fossil fuel. In any case, both of these fuels provide sustainable alternatives to traditional fossil fuel energy sources.

If renewable fuels still burn, why are they any better?

While it is true that renewable fuels release CO2 to the atmosphere (just the same as fossil fuels), the important distinction is where the carbon molecule came from originally. In the case of fossil fuels, it comes from massive stores of carbon in the earth (crude oil, natural gas, coal). In the case of renewables, the carbon molecules are pulled from the environment. When they burn to create energy, the resultant CO2 is returned to the state it originated prior to the growth of the organic material that provides the source of the renewable fuel. Release of CO2 from short cycle carbon does not add to the global carbon cycle, as the carbon was already present.

How much U.S. energy comes from renewable fuels?

American refineries had a crude oil capacity of about 19 million barrels per day in 2020. Today, that number significantly dwarfs the production of renewable diesel and biodiesel together, but both are gaining ground fast.

At the end of 2020, renewable diesel production in the U.S. stood at 38,000 barrels per day. Renewable fuels have a long way to go before they even come close to fossil fuel diesel, but the industry is projecting sustained growth. The Energy Information Administration (EIA) estimates that the production of biodiesel will reach an average of 130,000 barrels per day in 2022, while the production of renewable diesel is expected to reach similar levels in the same year. 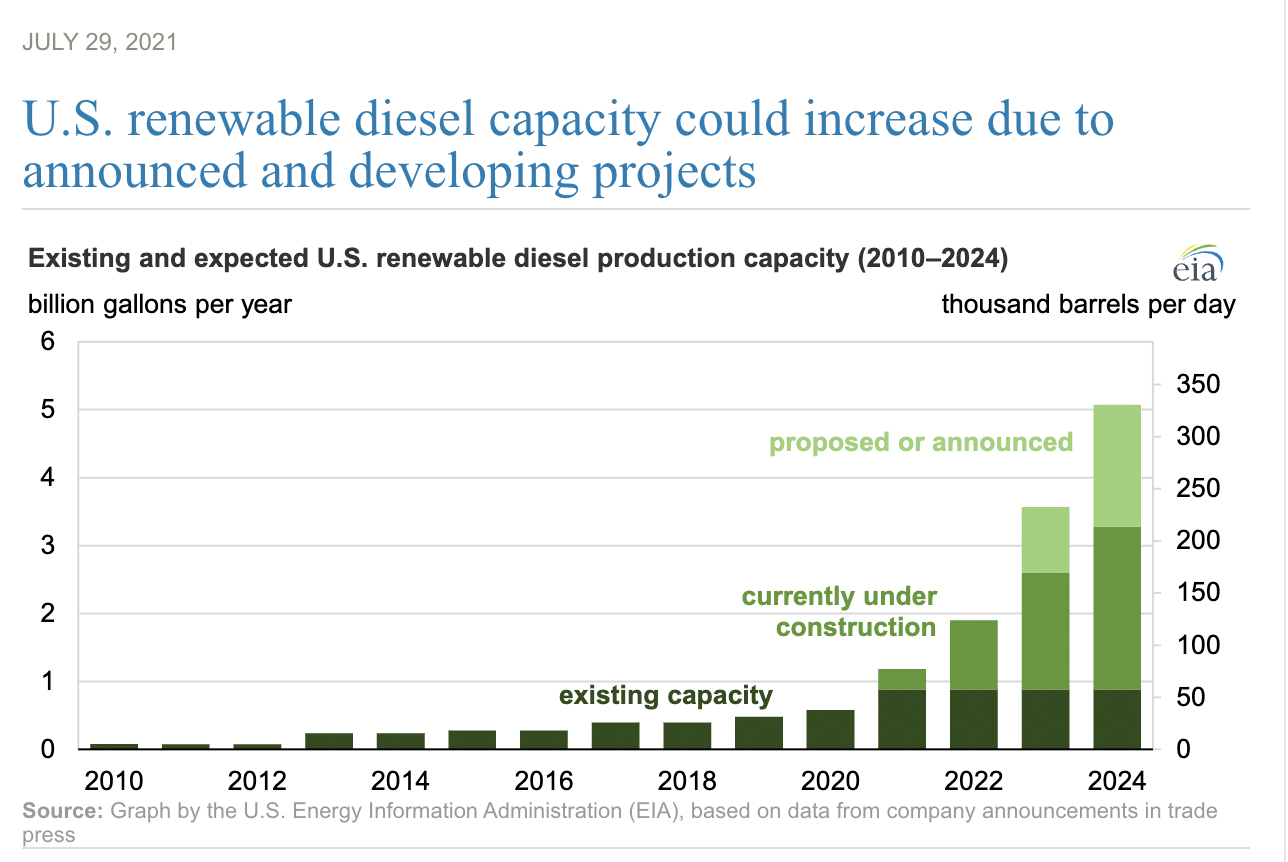 Who are the top renewable fuel producers in the U.S.?

There are several companies that are on the leading edge of renewable and biodiesel production in the United States. They are building new infrastructure, converting existing refineries, and working hard to deliver a sustainable alternative to fossil fuels.

Why are companies turning to cleaner fuels?

Energy producers are transitioning to renewable fuels for a variety of reasons.  The energy production landscape is changing:

In addition to the important drivers above, there’s one that stands above the rest-- there are significant economic incentives to transition.

Both the federal government and California offer $1 per gallon tax credit to people who use renewable diesel or biodiesel alternatives. These incentives have increased the appeal of alternative fuels to consumers and have led to an increase in demand.

Many companies are taking part in the energy transition in the United States. The two primary characteristics that define these producers are a willingness to adapt to a changing landscape and an openness to forming new partnerships. For example, large energy producers like Love’s, Valero, and others are building relationships with agricultural and food producers to ensure a steady stream of bio inputs for their renewable diesel operations. But, not all planned projects will be able to make the cut because there’s simply not enough feedstock available to meet demand. This is one of many supply chain and logistical challenges that will influence where renewable fuels fit in the energy transition.

Clean logistics and responsible operations as a key differentiator

Producers will need to evaluate every element of their production chain very carefully; What is the net C02 footprint? How do they calculate their baseline and what levels are acceptable yet realistic in the oil and gas industry? How do they ensure efficiency in their workforce logistics and day to day field operations? Are they wasting resources like water or energy in the production process? What waste streams do these new processes produce and is there a possibility to treat and reuse them? Professional services are available to analyze the solids content of waste streams to minimize wasted feedstock and maximize the value of the resource. In addition, resource efficiency can be achieved by optimizing water systems to save energy, conserve water,  and increase operational efficiency to lower environmental footprint.

The companies that will prevail must remain focused on the underlying goal; environmental sustainability. This transition is complex and companies making the switch are tackling the energy transition challenge head on. It’s an opportunity for growth, to create a reliable energy supply, to improve the environment, and to satisfy increasingly eco-conscious consumers. Adapting to a clean energy future means staying relevant, profitable, and responsible.

Although current production of renewable diesel may lag behind biodiesel at the moment, it is likely to be the biggest clean energy player moving forward. The reason is that it’s cleaner, higher performing, and uses the same infrastructure as fossil fuel diesel.

One thing is clear, it’s going to take a lot of cross industry collaboration to tackle this daunting challenge. Which US energy producers will rise to the occasion?

Learn more about our circular economy solutions for refineries 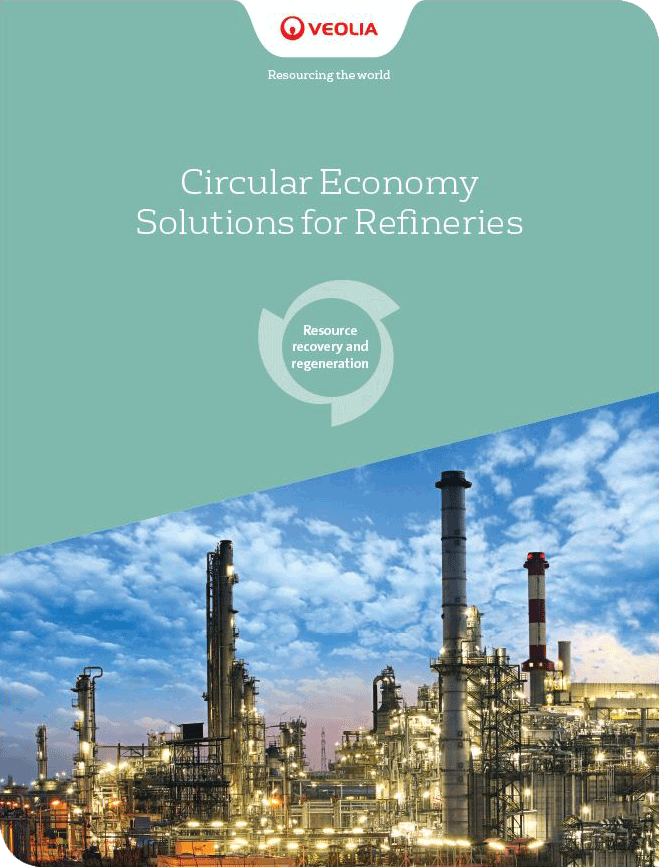