How Capital Program Management Can Save Failing Water Networks

Infrastructure. It’s one of the buzzwords making the rounds in Washington DC lately, as Congress works to pass legislation that would invest heavily in badly needed infrastructure upgrades across the country. But what specifically do they mean by “infrastructure”?

It’s a broad term, but in general it means the network that supports access to essential services in our communities, from roads and bridges to Internet and utilities. In other words, it’s the systems that have been built that allow you to drive from one place to another or flush your toilet or turn on the lights.

The legislation being debated in Congress would provide relief for many municipalities, at least to some extent. But at the moment it’s far from certain that the legislation will ultimately be approved. Even if it does, it likely will not be enough to fully bring the nation’s water infrastructure up to 21st Century standards.

The importance of infrastructure improvements

Nothing is more important than access to clean, reliable water. It is fundamental to the well-being and survival of our communities. But as with much of the nation’s infrastructure, the vast systems of water distribution networks and treatment facilities have been in steady decline over the past several decades, presenting a challenge to cash-strapped municipal and state governments that lack the funds to invest in improvements.

The costs have been so prohibitive that most communities have either paid for minimal “band-aid” repairs to keep their aging systems functioning, or they have simply put off making improvements altogether.

According to one estimate, the costs for this inaction are staggering, with an estimated six billion gallons of water being lost every day due to breaks in water mains. Many systems are more than 100 years old and decaying to the point that it is difficult to maintain standards for water purity.

In a time when the world’s resources are already stretched thin, this is not a sustainable situation for a resource as vital as water.

What can be done?

An increasing number of municipalities, wary of waiting for support from the federal government, have turned to third-party contract operators to modernize their water and wastewater systems, relying on contractual incentives to improve the efficiency and sustainability of their water assets. That has gone a long way in helping municipalities reach a point of stability where they can continue to reliably and safely meet the water needs of their communities.

The traditional design-bid-build approach has been an effective approach for many municipalities. However, there are drawbacks:

Capital program management (CPM) is a refreshing solution to a utility infrastructure project that optimizes capital budgets, reduces risk, and avoids schedule delays. This delivery process is a collaborative solution with the right partners based on a foundation of facility history, system priorities, criticality, compliance and resilience.

CPM benefits municipalities by providing them with access to tools and resources at the disposal of their third-party contract operators. This brings tangible benefits to municipalities in a number of ways:

A number of municipalities have already reaped the benefits of a CPM approach. In Smithfield, RI, for example, the town achieved $100,000 in savings on a small disinfection system project. Meanwhile, the Town of Danbury, CT achieved in excess of $40 million savings on a major facility upgrade after receiving bids via traditional design-bid-build. It’s an approach that works for projects of any size and scale.

Taking the important next step

After decades of putting off improvements to the nation’s water infrastructure, municipalities are realizing that they can no longer afford to delay long-needed upgrades. Water distribution systems are corroding and crumbling, putting public health at risk. By using a capital program management approach, municipalities can take advantage of construction improvements at an affordable cost.

To learn more about capital program management, watch our webinar. 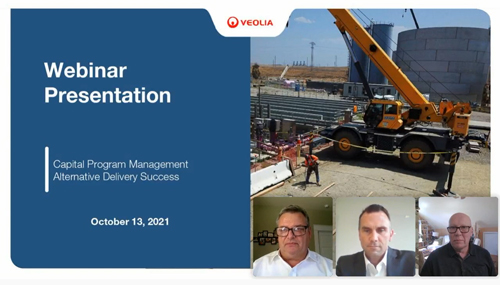