As much as 40 percent of the United States’ food supply ends up being discarded as waste, contributing to an estimated 31 percent food loss at the retail and consumer levels. This adds up to approximately 133 billion pounds and $161 billion worth of food in 2010 — most of it ending up in our nation’s landfills. In fact, food waste makes up as much as 30 percent of the total waste stream in the U.S. and Canada, the largest contributor to the waste stream.

And it’s not just food that’s being wasted. Emptying uneaten food into landfills also consumes important resources like water. A report by the Natural Resources Defense Council illustrates how food waste ends up consuming nearly a quarter of the U.S. water supply in the form of uneaten food, or over $172 billion in wasted water.

Just how much food is going to waste?

Each year, the U.S. spends over $220 billion growing, transporting, and processing almost 70 million tons of food that ends up going to waste. This uses up 21% of U.S. freshwater supplies, 19% of fertilizer, 18% of cropland, and 21% of landfill volume. All of that food waste would cover more than ¾ of California. 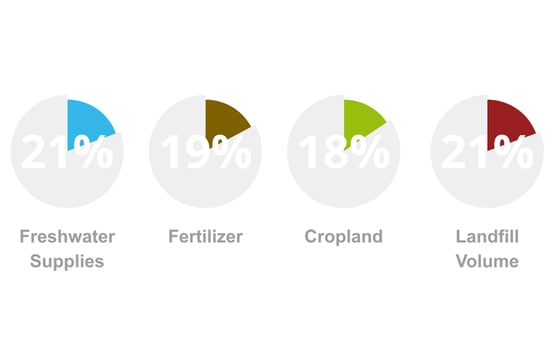 This comes with a heavy carbon footprint as well. When food is disposed of in a landfill, it rots and becomes a significant source of methane — a potent greenhouse gas with 21 times the global warming potential of carbon dioxide. Growing and transporting the food that goes to waste emits as much carbon pollution as 39 million passenger vehicles.

The global food system is responsible for up to one-third of all human-caused greenhouse gas emissions, making it one of the largest contributors to climate change. Yet these same statistics show the enormous potential for reducing the nation’s environmental footprint through smarter food consumption and disposal.

Thankfully, a great solution to the food waste dilemma is anaerobic digestion.

What is anaerobic digestion?

Anaerobic digestion (AD) is the natural process in which microorganisms break down organic materials. “Organic” in this case means coming from or made of plants or animals. Anaerobic digestion happens in closed spaces where there is no air or oxygen.

The following materials are generally considered “organic.” These materials can be processed in a digester:

Through the anaerobic digestion process, biogas is produced.

Biogas is a renewable energy source that can be used in a variety of ways. Communities and businesses across the country use biogas to:

How is biogas used?

How biogas is used and how efficiently it’s used depends on its quality. Biogas is often cleaned to remove carbon dioxide, water vapor, and other trace contaminants. Removing these compounds from biogas increases its energy value.

Over the past decade, the technology that goes into AD has evolved to the point that it offers a viable, economically sound alternative to disposing of food waste in landfills. This is being successfully accomplished in a growing number of communities, most notably in Canada.

How the City of Toronto uses anaerobic digestion

The City of Toronto built its second anaerobic digestion plant back in 2014 — designed to divert and revalue a broad range of acceptable materials from landfill and convert them into renewable energy and other beneficial use products at this facility.

The results of the AD process, from an environmental perspective, can be impressive:

Because of results like these, there is enormous potential for anaerobic digestion to become a viable option for municipalities and industries that want to tackle their food waste challenge in ways that are economically and environmentally sustainable. It’s a challenge that needs to be met now.

Download the brochure to learn more about anaerobic digestion