Medical Waste Disposal, Now and in the Future

Properly disposing of regulated medical waste is a necessity for a large number of facilities and businesses. Medical waste refers to the waste generated from medical and biological activities, such as the diagnosis, prevention or treatment of diseases. The usual producers of this type of waste include veterinary clinics, health clinics, funeral homes, nursing homes, hospitals, medical research laboratories, physician offices, dentist and home health care.

The first step is ensuring the waste is safe, sanitary, and no longer regulated before disposal. This means putting medical waste through some type of process that eliminates all the bacteria, viruses, fungi, spores and any other potentially harmful substances that may have contaminated whatever you are disposing of. The second step is deciding where to dispose of the waste once sterilized and additional factors are environmental and energy concerns.

The most common methods of regulated waste disposal for medical waste are described below, along with newer methods that are becoming more pervasive throughout the industry. Ozone and gasification are two newer methods that can eliminate issues associated with other waste treatment procedures, while creating the potential for energy production in the process. These methods don’t just eliminate waste, they turn it into a resource.

The majority of medical waste disposal companies and large healthcare facilities across the United States use a technique called autoclaving. With autoclaving, heat is used to sterilize the equipment, medical waste or other contaminated objects. It works by putting the objects into a cylinder which is then filled with pressurized steam to evenly heat everything and eliminate any microorganisms and sterilize non-pathological infectious waste. In hospitals, autoclaves are typically used for the sterilization of reusable medical equipment. 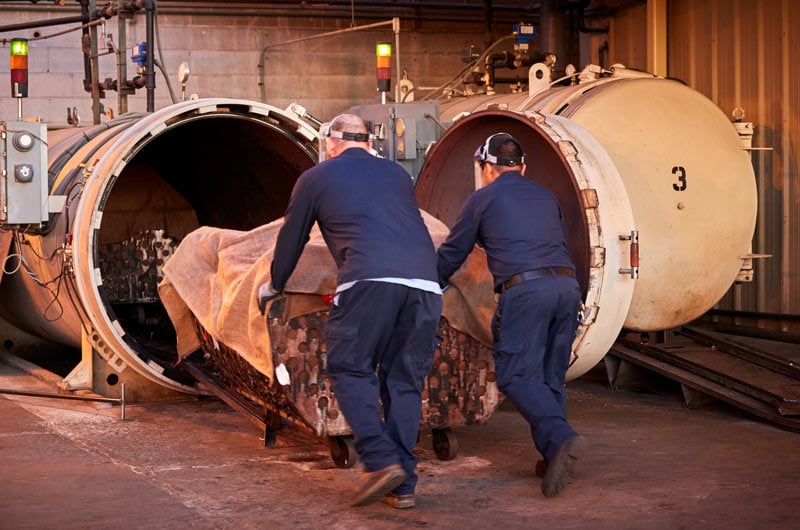 Incineration is a common method of commercial disposal typically used for pathological and pharmaceutical waste. Incineration is a high-temperature process that reduces organic and combustible waste to inorganic, incombustible matter and results in a very significant reduction of waste volume and weight. An added benefit of incineration is that there is very little physical waste left over after the process. This is often the disposal method of choice for waste that cannot be recycled or reused and is required for pathogens.

The problem with the current and traditional methods of medical waste disposal is they are often inefficient, incomplete, or produce new waste in the process of treating the current waste. For this reason, waste generators are constantly on the lookout for more sustainable alternatives to autoclaving or incineration, followed by landfilling.

The primary issues with autoclaving is that it focuses largely or solely on sterilization. But after everything is sterilized there is still the physical, solid waste itself to deal with. Much of this waste is then simply thrown away and ends up in a landfill. Even incineration leaves behind ash, which must be managed in a landfill.

In short, autoclaving and incineration were the best and most common methods for many years. But now there is a cleaner, safer and more efficient method that has been developed: ozone waste disposal technology. 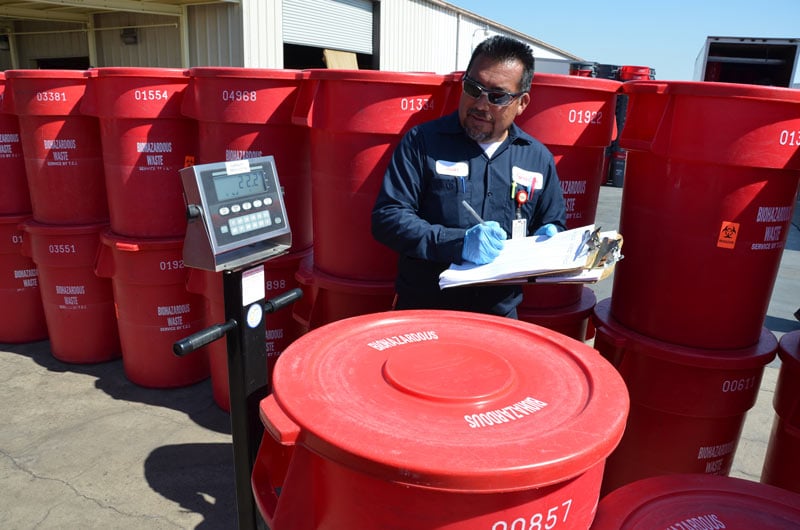 Using ozone waste disposal technology, the disposing of medical waste is completed in a responsible and ethical manner that destroys the contaminants and doesn’t cause pollution in the process. In other words, the process is both eco-friendly and safely increases public and environmental health in the communities where we live, work and play.

Ozone is a powerful oxidizing agent. It is able to oxidize a range of molecules including metals (with the exception of gold, platinum, and iridium), nitrogen oxides, carbon, ammonia and sulfides, just to name a few. It has been widely researched as a water treatment method and disinfectant, due mainly to its ability to oxidize carbon-carbon double bonds, killing essentially all pathogens, including bacteria, fungi, viruses and prions, in the process.

Where there is real excitement, however, is in applying this treatment to medical waste disposal. Current ozone treatment technology uses an automated, hands-free, continuous feed medical waste processing machine. Using electricity, ozone gas and an industrial shredder, medical waste is reduced by 90% to a sterile confetti residue. The natural oxidizing power of ozone sterilizes medical waste with zero emissions and surpasses the standard disinfection of autoclaving, achieving superior results on spore strip testing.

The entire process, from loading, through shredding, ozone treatment, and unloading, is fully automated, reducing the exposure of workers to materials. This also allows for safer, faster and more efficient waste processing.

The primary current method of medical waste disposal is the autoclave. The problem is, autoclaving requires boilers to be heated for the production of steam and this requires a lot of energy for each batch of medical waste that is treated. Ozone reduces the energy required to process waste, which increases its environmental friendliness by conserving resources and reducing greenhouse gas emissions.

An additional benefit of using ozone is that it doesn’t saturate the waste with water like autoclaving does, which reduces its value as a potential fuel source. This allows the sterilization and break down of waste material, while also keeping the residual waste out of landfills. The treated waste is then available to be used as a fuel source.

More than just using less energy to process the waste, ozone technology allows companies to put their waste to work. By blending the residual waste with various oils and solvents, waste generators can create a fuel source that replaces the burning of coal in many instances.

Looking down the road, the next large development in medical waste disposal will be large scale gasification.

Gasification is a process that uses a feedstock, in this case medical waste, for a thermal-chemical conversion of that waste into high BTU synthetic gas. This is done in a low oxygen and high temperature environment and causes material breakdown at the molecular level to carbon monoxide, hydrogen and carbon dioxide. After treatment, combustion gases are further treated and syngas is collected.

The attractiveness of the gasification process stems largely from the fact that, similar to the ozone method, it has the potential to create energy. With gasification, the waste produced by a hospital or medical center is disposed of safely while also producing a renewable source of energy at the same time.

As we shift towards a lower carbon economy, the gasification of waste is going to be a critical piece of that puzzle. Landfills and incineration produce large amounts of emissions and, in the case of landfills, take up a lot of space. Additionally, most current, traditional methods use a net amount of energy instead of producing it.

Waste as a resource

The future of medical waste disposal is a change in our perception of “waste.” With ozone quickly becoming the method of choice, and with gasification on the horizon, we aren’t just finding cleaner methods of disposal, we are transforming “waste” into an efficient, clean energy source. Very soon, facilities like hospitals will be able to be powered by the very waste they produce. Both gasification and ozone technology have the potential to vastly reduce the environmental impact of medical waste disposal, while dealing with the waste in a safe, effective manner, all while creating a sustainable energy source.

Learn more about our medical waste disposal solutions in our Healthcare Services Brochure. 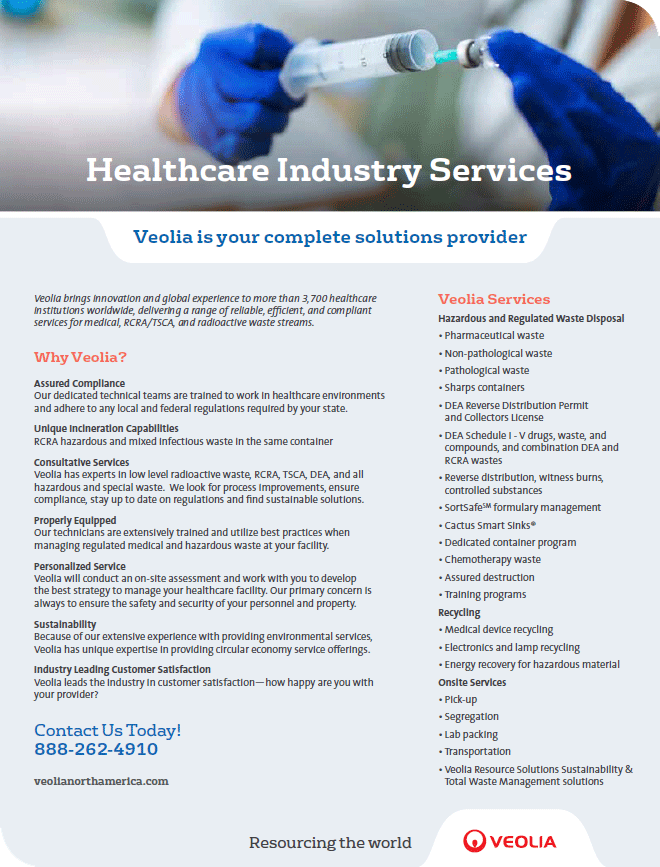