What does it mean to be carbon neutral?

The term carbon neutrality is increasingly being used by building owners, manufacturers, and local governments taking on the challenge of reducing the world’s carbon footprint. In a nutshell, carbon neutrality describes the goals that a growing number of sectors are setting to achieve a net zero output of carbon dioxide emissions, maintaining an equilibrium in which existing emissions are offset by counterbalancing reductions. This means that while some emissions are still generated by a building or process these emissions are offset somewhere else, making the overall net emissions zero.

The ultimate goal behind these efforts is to one day move toward a zero emissions society in which carbon emissions are eliminated altogether — but this goal is years away from being achievable. A key step toward getting there, in both the U.S. and in many other countries around the world, is pursuing carbon reduction strategies and solutions that will achieve carbon neutrality.

The effort to achieve carbon neutrality is being pursued aggressively in New York City, where the city’s recently adopted Climate Mobilization Act has emerged as the most comprehensive legislation in the country for establishing strict emissions standards. As other parts of the country, such as Boston and Philadelphia, begin to follow suit, New York City has established ambitious timelines for businesses and industries to achieve net zero goals for reduced carbon emissions. 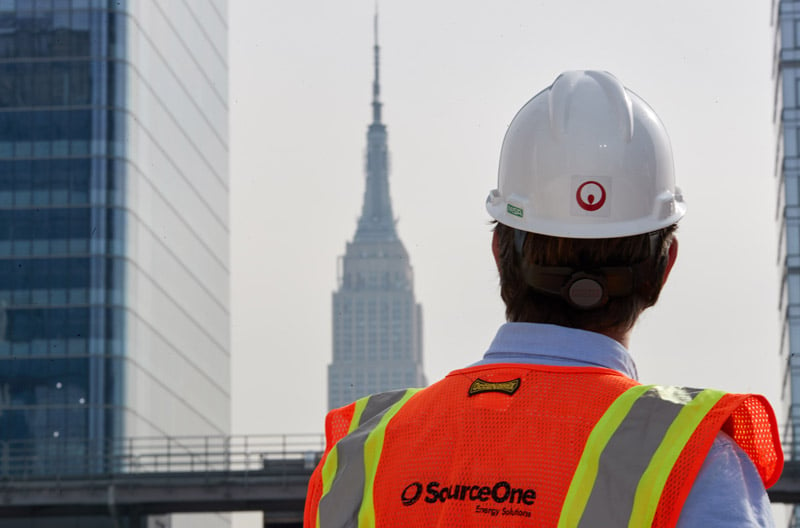 Realizing that not all businesses, facilities and institutions are in a position to meet these goals on their own, the city is developing a carbon market in which credits can be purchased or traded to be put toward reductions in other areas. In most cases, one carbon credit represents one metric ton of carbon dioxide, and the credit must be used to achieve that level of carbon reduction somewhere else.

A cap can be instituted in order to set a limit on carbon emissions. This creates quantifiable goals and a tradable commodity. Buildings that emit less than their target level receive credits that can be sold. Buildings that emit more than their target must find ways to reduce their emissions or purchase credits on the open market. Supply and demand forces will dictate prices in a similar fashion to other markets.

In a city dense with skyscrapers and massive complexes for industries like pharmaceuticals and healthcare, meeting the CMA’s emissions caps for buildings over 2,500 square feet requires careful consideration and planning before taking concrete steps. This challenge applies not only to New York City, but anywhere businesses or institutions are looking for ways to achieve carbon neutrality.

The most important question a building or facilities owner should ask at the outset is: How much energy is my facility consuming now? Because if you don’t know the answer to that, you can’t realistically expect to achieve your carbon neutrality goals.

How can we get there?

Here are some innovative ways to help building owners and facilities managers get started:

Once a building owner or facility manager has taken these steps, they can proceed to a number of options if they find they cannot take sufficient steps to reduce energy consumption on their own to meet their carbon neutrality goals. Besides the carbon credit marketplace, other options include:

Learn more about our energy management and market advisory solutions.

Learn more about our energy management and market advisory solutions