How is Sulfuric Acid Regenerated?

Globally, more sulfuric acid (H2SO4) is consumed than any other industrial chemical. In the U.S. alone, over 35 million tons of sulfuric acid are produced every year — roughly two and a half times the amount of propylene, which is second on the list.

More than half of the sulfuric acid in North America is consumed by the fertilizer industry. A large portion of the remaining supply is used for manufacturing a wide range of materials, such as glue, preservatives, cosmetics, dyes, pulp and paper, steel, pharmaceuticals, explosives, batteries, etc.

Another key application is in petroleum refining, where the acid is used as a catalyst in the alkylation process for the production of high-octane gasoline. Today, there are approximately 100 refineries across the U.S. with alkylation units, which use either sulfuric acid or hydrofluoric acid as the production catalyst.

In many industries, including refining, after the sulfuric acid has performed its function, it becomes partly neutralized (i.e., spent). It also picks up multiple impurities, such as organics and metals, making it unsuitable for immediate reuse. In such cases, operators face the dilemma of what to do with their spent sulfuric acid.

Like any potentially hazardous chemical, one option is disposal. Depending on the volume and specific grade of the acid, this can be carried out through any number of methods, including neutralization, incineration, or in some remote locations, deep well injection. However, as demand for sulfuric acid continues to grow and companies face greater pressure to find more sustainable outlets for their byproduct and waste streams, one option that has become increasingly attractive is regeneration.

How is used sulfuric acid regenerated?

First, the feed acid coming into the SAR plant is concentrated to remove any water. This effectively reduces the total volume of the spent stream before it enters the regeneration furnace where it undergoes thermal cracking.

In the furnace, the concentrated acid is atomized via mixing with compressed air and heated to around 1000 - 1200°C. At these temperatures, H2SO4 breaks down into sulfur dioxide gas (SO2) and steam.

The SO2 gas stream then enters a cleansing/purification process, where impurities, like organics, metals and ash are removed. The gas is then dried by contact with weak sulfuric acid (93 - 96% H2SO4) in a packed bed tower. After leaving the tower, the clean and dried SO2 enters a contact vessel, where it reacts with a catalyst, resulting in the production of sulfur trioxide (SO3).

The case for regeneration

The rising demand for alkylate in the production of gasoline has resulted in virtually 100% of the refining industry’s spent sulfuric acid being regenerated. This is typically achieved by piping the spent acid directly from the alkylation unit to an onsite (or nearby) SAR plant. In other cases, the spent sulfuric acid may be transported via truck or rail to a merchant regeneration plant.

In both cases, the SAR plant provides a cost-effective, environmentally sound and flexible alternative to traditional sulfur management systems. This has been especially true in recent years, as regulations surrounding sulfur oxide (SOx) emissions from refineries have become increasingly strict.

SAR plants not only give refiners the capability to regenerate their spent acid and reduce emissions; they also provide a means to more effectively recover part or all of the plant’s acid gas.

For other, non-refinery industrial users of sulfuric acid, the question of what to do with spent acid streams is more complex. In the vast majority of cases, the quantity of spent acid being produced is too low to justify the construction of a dedicated SAR unit. The primary method of disposal in these cases is neutralization, which involves adding the spent acid slowly to a larger volume of agitated soda-ash solution or slaked-lime slurry. Depending on local regulations, the neutralized solution may then be diluted with water before being discharged.

When very large volumes of spent sulfuric acid are being generated (>2,000 tons per year), regeneration or recovery may be more economical than neutralization. However, many factors must be considered in evaluating its practicality, such as chemical market conditions, possible reuse within the plant, and geographical proximity to a regeneration or recovery facility. The latter is often less of a limiting factor than is widely perceived.

The rising demand for sulfuric acid worldwide, coupled with increasingly strict SOx emissions regulations and a growing corporate focus on reducing environmental footprint has made spent acid regeneration in many instances an attractive alternative to traditional disposal techniques, such as neutralization.

Regeneration represents a win-win sustainable development opportunity that enables sulfuric acid users to contribute to the circular economy, while reducing the costs and risks of hazardous waste disposal. A recent study from McKinsey which focused on Europe, found that the circular economy concept could boost the EU’s resource productivity by 3% through 2030, generating cost savings of over $600 billion a year and nearly $2 trillion more in other economic benefits.

Ultimately, the circumstances surrounding every industrial facility are different and sulfuric regeneration may not always be the right option. Nonetheless, plant operators (particularly those who are producing larger volumes of spent acid), should leverage the expertise of proven companies to evaluate the viability of regeneration and beneficial reuse.

Learn more about sulfuric acid in our PUSH information sheet.

Learn more about sulfuric acid in our PUSH information sheet 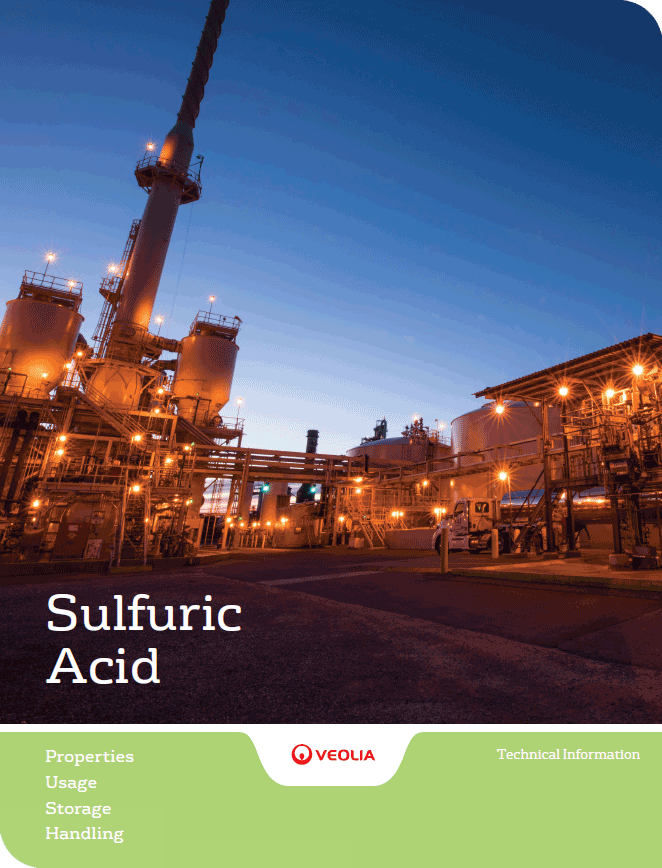